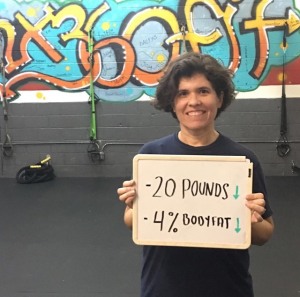 Without music, life would be a mistake.

Where did you grow up?

I grew up in Northern NJ and went to college in Nashville,TN (Go Vandy!!) I moved to Phoenix 2 years after graduating college for a job with Embassy Suites.

How did you become interested in and how long have you been with Phoenix 360 Fitness?

I had been going to a kickboxing gym, but the only classes I could attend were at 5am (which I HATED). Right when I decided to look elsewhere, they shut down, so that was easy. When I discovered that Phoenix 360 Fitness is 2 miles from my house and has 30-minute classes during my lunch hour, I was sold. (Then I realized how much fun it is – even better!)

What’s was your recent biggest hurdle and how did you overcome/managed it?

Staying on the Phoenix 360 Game Changer eating program for 8 weeks was a big hurdle for me. I had to break some unhealthy eating habits (like the 2pm carb munchies) and resist food temptations that are in the house for my family. I couldn’t eat the same stuff my family was eating for dinner either. Fortunately, my husband was very supportive of whatever I had to do to follow the program. We were also in the middle of a kitchen renovation which made it extra challenging. Normally, I probably would have eaten out quite often without a kitchen. I kept telling myself I just had to make it through each week. Then when the weight started to come off, that helped a lot! So did the cheat meals. I also had a good friend who was on an eating plan at the same time, and we complained a lot to each other.

What motivates/inspires/determines you to train and push yourself to your limits?

I had a child late in life. He is now an energetic 6-year-old. I want to keep up with him and set an active, healthy example for him. (Also, I don’t want to feel like an old fart at his elementary school when I see parents who are probably 15 years younger than I am.)

How much do you exercise?

I attend the noon Sweat Bootcamp session at Phoenix 360 Fit four days a week. I miss one day because I have to go to the office in North Phoenix (blah). On the weekends, I try to go to a step or Zumba class. Plus, I recently discovered aerial yoga, and I try to go once a week to that studio.

How has your training at Phoenix 360 helped you in your life?

Probably in more ways than I can express, but here’s one little thing: I recently volunteered to coach my son’s baseball team! This is my first time coaching, and I’m not sure I would have done it before Phoenix 360 Fitness. Not only do I feel healthy, strong, and energized to handle ten 5 and 6-year-olds, but I’ve taken a few ideas from our workouts and used them in warmups with the team. On Wednesdays, I work a full day, work out at noon, coach the team for an hour, and then head to choir practice. I’m quite certain Phoenix 360 has given me the energy to handle it all (and enjoy it!).

Generally speaking, I really enjoy AMRAPs and any exercise where I pretend like we’re in ballet class. I have a love/hate relationship with planks. (So good for me, and I’ve gotten so much stronger doing them, but I wouldn’t call them “fun”.) I also enjoy old school step classes with complicated moves.

How do you balance your time with a job, your family, and taking care of yourself?

My husband and I obsess over our shared Google calendars; we are master schedulers! I absolutely love my job, so working isn’t a chore for me. It challenges me mentally and creatively. Working from home saves me a ton of time not spent commuting. My husband’s family lives nearby, and they love spending time with our kid. I’m in several musical groups at church; practicing with them is good for my soul! On the other hand, my house is kind of messy, and I never get my car washed.

If you could give our readers one health weightloss tip, what would it be?

Two things help me. I put on my work out clothes first thing in the morning (yay working from home), so I’d feel guilty skipping a workout when I am already dressed for it. Other times, when I I’m temped to skip, I tell myself, I’ll never regret having done it, but I’ll definitely regret it if I don’t. I try to make Future Kristen proud of my decisions.